Mirabilandia, with its 850,000 square metres is the largest amusement Park in Italy and it is the ideal destination for visitors of all ages.

The Park, situated a few kilometres from the coast of Emilia Romagna and from Ravenna, makes it possible for everyone, young and old, to satisfy the most varied expectations. Adventure, adrenalin, shared experiences, relaxation are the ingredients of a unique experience, for healthy and safe fun.

Large outdoors areas and over 40 attractions make the Park a place of leisure able to provide great emotions. Many themed areas for children and teenagers to experience a dream with their eyes wide open and where adults discover it's still possible to be amazed.

Experience lots of emotions and challenging oneself is a must on the attractions of the Guinness world records like iSpeed, the tallest and fastest coaster with magnetic launch in Italy; Katun, the longest inverted coaster in Europe; Divertical, the tallest water coaster in the world and Eurowheel, the second tallest observation wheel in the continent.

Another highlight at Mirabilandia are the shows: an exclusive programme to amaze spectators with the professionalism and skill of its artists. Highly applauded is also the not to be missed show inspired by “Hot Wheels”, the Stunt Show in Europa with the widest acclaim. Lastly, the seasonal events, like Halloween that, at Mirabilandia, is truly a unique experience and absolutely something to try.

In 2000, the arrival of what is still today the longest inverted roller coaster in Europe, Katun, a Guinness world record attraction which immediately earns the approval of the bravest visitors. Regarding the shows, in 2000 the inauguration at the Park of what will become the most highly acclaimed stunt show in Europe: Scuola di Polizia. Today, thanks to the partnership with Hot Wheels, the show boasts a unique mobile loop, 18 metres in height, e a performance that had never before been carried out in an amusement Park.

In regards to the thematic areas, in 2014 Mirabilandia makes available for its youngest guests and dinosaur enthusiasts Dinoland with many attractions included: Reptilium, Raptotana, Rexplorer, Bicisauro, Brontocars, Monosauro. After 4 years, also the Far West Valley opens its doors complete with the largest Horror House in Europe, Legends of Dead Town. Last but not least, 2019 is the year of Ducati World: 35,000 square metres completetly transformed to welcome the first themed areas in the world inspired by a motorcycle brand and included in an amusement Park. 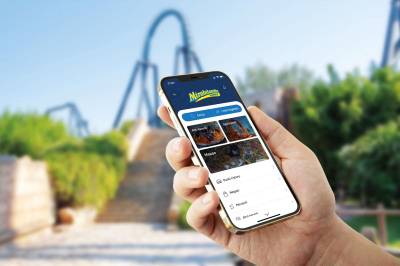